At our grade level math meetings, we have been discussing a very important question.

How do children learn math?

A powerful, and oftentimes perplexing question! Luckily, we are an IB school and the Primary Years Programme clearly lays out what they believe about how children learn math.

First, children need an opportunity to construct their own meaning about mathematical ideas and concepts. Then, they need the guidance and support to transfer their own meaning into conventional symbols, vocabulary and algorithms. Finally, they need a chance to apply their understanding. These three phases are fluid and children move back and forth through them in an on-going cycle.

The teams I work with have really taken interest in the phase of the cycle where students construct their own meaning. I think this may be because when we were students learning math, most of our teachers often jumped right into the second phase – conventional symbols, notations and algorithms.

Our teachers are discovering that there are many benefits to allowing students to construct their own meaning first, before jumping into symbols. Not only are their students understanding math concepts more deeply and communicating their understanding more clearly, but when it comes time to “teach” to conventional skills, notations and vocabulary it end up taking less time and sticking much better!

So now for the million dollar question in teaching…

What does it actually look like in the classroom?

Here are a few examples across the grades of how teachers are helping students to construct their own meaning about math:

This is a picture of an open-ended math center where students choose to play and no instructions are given in advance. Specific math manipulatives and writing tools are set out to try to lead students down specific paths and teachers and teaching assistants prompt with lots of questions.

Students have not been told that this is a ten-frame and have not been showed how to use a ten-frame. Yet, as the students play their curiosity drives them to experiment with how many squares fit inside and how many numerals fit inside. Allowing students this chance to interact with a ten-frame and construct their own ideas about it will make it much easier when it comes time to discuss “What mathematicians call this” and “How mathematicians use this”.

In this grade 1 class the teacher gave each student a single piece of white paper and told them to pick a bunch of things and go find out which thing is the most liked in the class.

Students have not yet been taught how to collect data. In fact, the class had never discussed data in anyway before this activity. Students had to figure out their own method to record the choices and how many people liked each choice.

Some students wrote the names of each classmate beside each choice.

Some student drew a picture of each person next to their choice.

Some students took a “short cut” and made a tick to represent each student to save time.

The teacher now had 20 different student-generated strategies for collecting data and as a class they could discuss the pros and cons of each strategy. From here, a lesson about taking tallies is much more purposeful because students have a context of when to use tallies and why they are helpful.

How many ways can friends fairly share this pizza?

Before Grade 2 students ever heard the word “fraction” they were splitting things into equal parts. Students were cutting up squares, circles, and rectangles in multiple ways to “fairly” share them with different amounts of people. 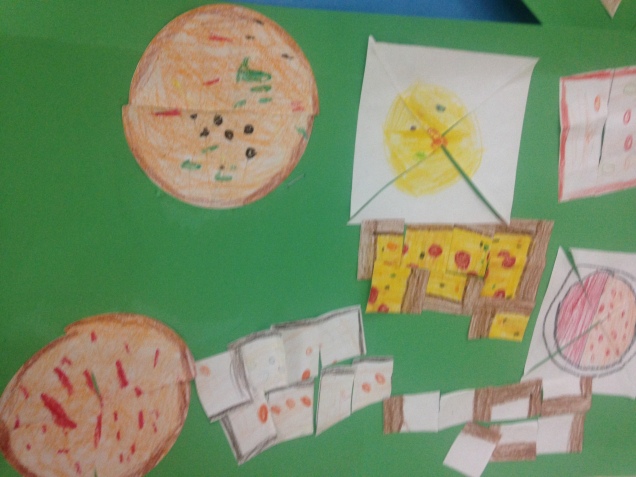 This provided a great context to introduce fraction vocabulary. Using the cut up pizzas, the teacher could ask many purposeful questions to help her students transfer their understanding of “fair shares” into the conventional understanding of fractions.

What is the fancy math word for ‘fair’?

What would a mathematician call something that has two equal parts?

What would a mathematician call something that has three equal parts?

Find something in the class and find the distance around the outside of it.

This grade 3 class was trying to figure out the distance around the outside of classroom objects without ever hearing the word perimeter or being taught the formula P = 2L + 2W.

These students were using logic to figure out that they could add up all the sides to find a distance around something. Some even discovered they could take a short cut when measuring a rectangle because both sets of sides were the same. One student even realized that when figuring out the distance around a square you could simply multiply the side by 4 to take a really quick short cut. Students were using rulers, cms, inches, blocks, paper clips… you name it. One student even cut a piece of string that could fit around the outside of her circular object and then held it against a ruler.

From here, the teacher is able to take their understanding and trade it for the conventional vocabulary and formulas for finding perimeter.

For this question, students were able to find the answers in any way that made sense to them. Some students drew wheels and put them in bundles of two and three. Some students split the wheels in half and figured out home many bikes and trikes would be in each half. Some students did repeated addition. Others did repeated subtraction. After one hour the most number of solutions found by one group was 4.

So when the teacher said she had a “math short-cut” to show them how to find 12 answers in 15 minutes, she had 100% buy in from her students. How different their level of interest would have been if she started with “Today I am going to show you how to use a table to find patterns.”

Some students went to the manipulatives shelf and took 6 “halves” and concretely put them together to discover that they could make 3 wholes. Others knew that multiplication was repeated addition, so they added 1/2 six times to discover the answer was 6/2 which is the same as 3. Other students approached the problem a different way. They drew a set of 6 objects and crossed out half, to show that half of 6 is 3. Now the teacher would be able to introduce the standard algorithm for multiplying a fraction by a whole number, and if that algorithm doesn’t make sense to someone, they have other self-generated and peer-generated strategies for finding the answer instead.

I think we can have both.

If we allow students to construct their own meaning first, then help them transfer their understanding into symbols, then have them apply their understanding I believe we can have well-rounded mathematicians who can not only “do” math, but also deeply “understand” math.

What do you think?

4 thoughts on “How Children Learn Math”