It’s no secret that the grade level I am involved in does things a little differently. Ok, “a little” might be an understatement. We are very different. And as a result, sometimes parents need support understanding and feeling comfortable having their children become part of our pilot program. With only a few months left in the school year -and next year right around the corner – this is one of those times.

It was important for us to collect their concerns, questions and worries to inform our planning for the session in response to their needs. So we asked them to fill out a short Google Form to help us gather that information. 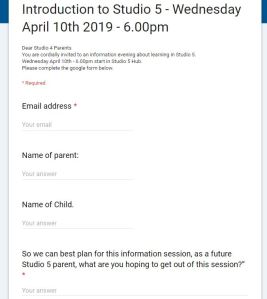 Then as a team, we analyzed their responses.

After analyzing their responses, it was clear most of them were looking for specifics about how things work and what exactly happens on a day to day basis.

But jumping into hows and whats without investing first in the why is not really our style… and not something that we felt would help to build sustainable buy-in for the long run. We believed the overarching goal should be to bring parents into the conversation about education, to help them develop themselves as critical thinkers. To be able to look at the current paradigm and question it, challenge it – hopefully even criticize it! So we had to figure out a way to address what they wanted from the session with what we felt was important for the session.

We decided to frame the evening as “Starting the Conversation” with a heavy focus on the whys, followed by a brief overview of hows and whats – with transparency about our plan for continuing the conversation in order to ensure they felt their voices were heard.

We had a great response! We had 40 families RSVP for the event.

And true to our collaborative approach, we had 10 representatives from our team there, each of whom took ownership over a small section of the presentation. It was important for us to show Who We Are in the way we work together in each and every thing that we do.

If our main goal was to bring parents into the conversation, it was essential to begin by poking and provoking their thinking about education. Both by ‘stepping in’ in order to connect with their own experience as a student and ‘stepping back’ to attempt to objectively look at the system of school from a distance.

We decided to use a chalk talk with a range of provoking questions to stimulate these types of thinking. 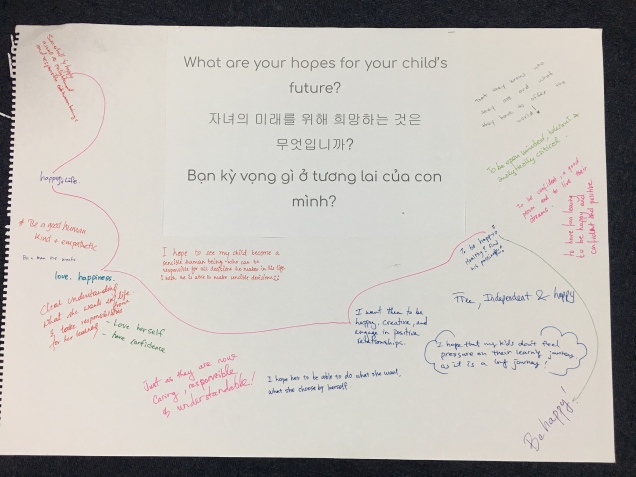 Then we brought the whole group together to pull out the big ideas from each of the provocation chalk talks. At first the parents were hesitant to contribute, but once we got the ball rolling lots of great ‘noticings’ were shared.

We finished the discussion with what parents hoped for their childrens’ future, which acted as a great segueway to our next provocation about skills. Instead of telling parents what skills are currently valued, we wanted them to make those discoveries for themselves. So – in the vernacular of our students – we had them “search it up”!

All the parents took out their phones and did a little research about what skills are currently valued in post-secondary and the workplace. After some inquiry time, we had parents shout their discoveries. Some began to make connections with responses from the chalk talk, which was an unexpected bonus!

Which walked them right into one of our main provocations….

If the nature of desired skills keep changing so rapidly, who amoung us knows exactly what will be needed by the time their child graduates in 2030?

Which helped us usher in AJ Juliani’s quote:

Investing a large chunk of time into provoking parents’ thinking, let us transition smoothly into talking about the “why”.

We touched on that nature of the industrial model of education… 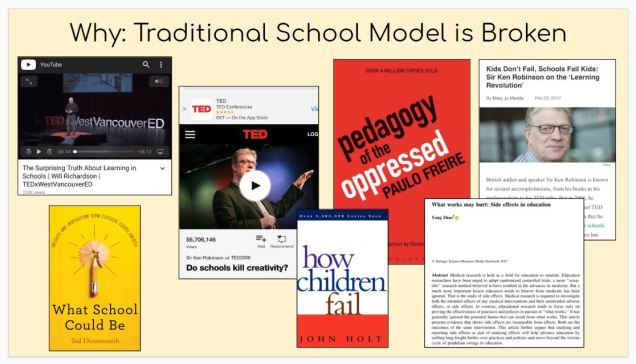 And we ended with the need for a radically different approach. 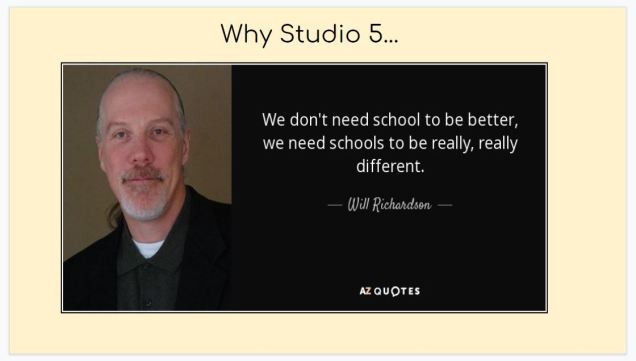 Even though our main focus was the “why” behind our approach, we also wanted to honour our parents and most of their worries and concerns were centered around “hows” and “whats”. So we made sure to briefly touch on some of the most important “hows” without going too deep into the details.

We explained how our mission statement drives everything we do as well as the time, thought and energy that went into developing it.

We explained how we have a broad view of “success” and how we make sure success in one area does not come at the expense of another area. 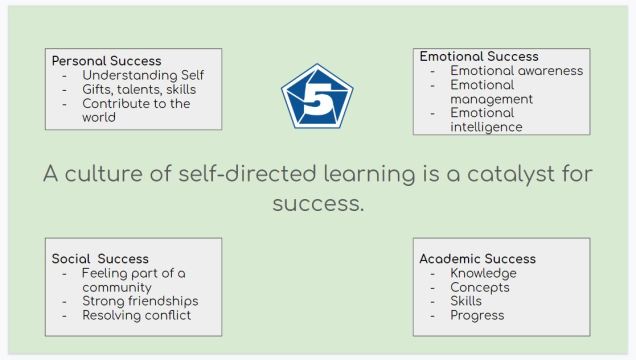 We hilghted the importance of learning how to learning and how we use the PYP ATL skills to support that.

We touched on how we use Dan Pink’s work on motivation as a driving force behind what we do.

We explained how we work as a team with parents and students to ensure everyone’s voice is heard and perspective is valued.

We shared how Learning Support, Challenge and Enrichment and EAL support works in our model. 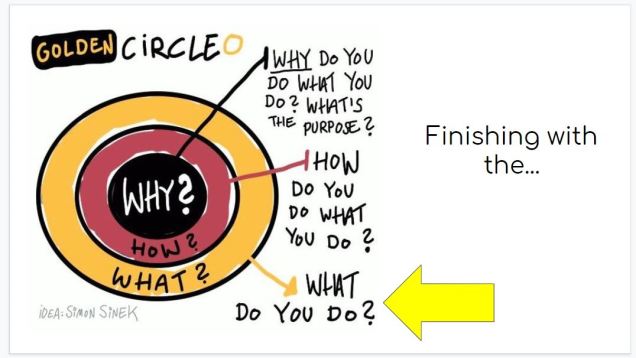 The majority of the worries and concerns that parents shared in the aforementioned Google Form were about ‘what’ exactly happens on a day to day basis. And although we wanted to honour their voices, we also wanted to be careful not to oversimplify this part or give off the idea that it is static and concrete. Because the truth is that the “whats” are constantly changing. So “what” a typical day looks like now, is not what a typical day looked like a month ago, and will not be what a typical day will like for their child next year. So we decided to acknowledge the whats, without committing to any specifics.

For example, we addressed the fact that our approach still includes transdisciplinary Units of Inquiry as well as stand-alone math and literacy… 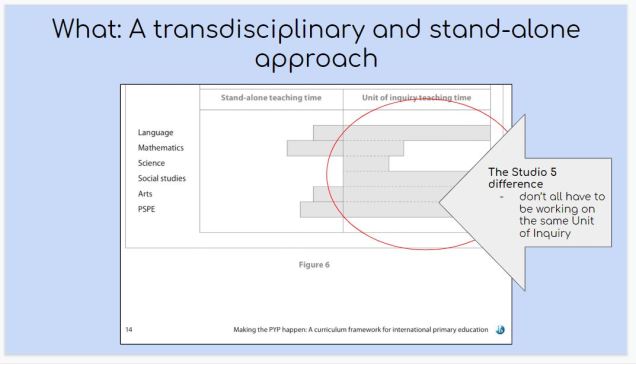 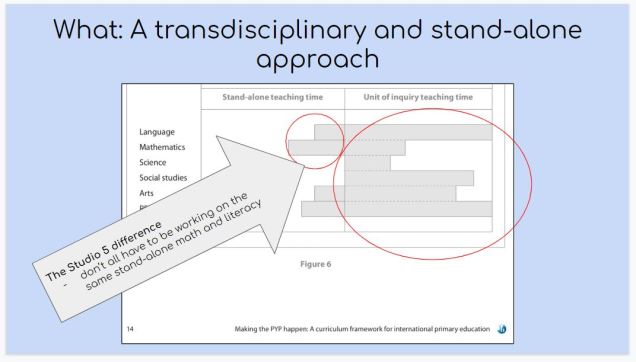 We explained that our approach includes many different pathways for learning… 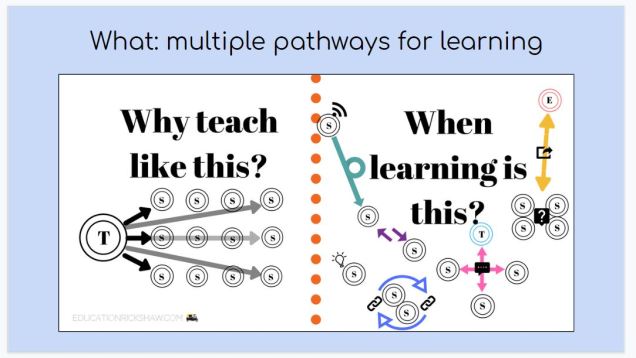 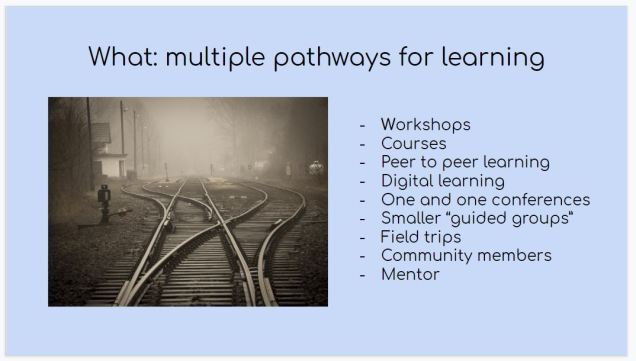 We acknowledged many of the nuts and bolts of our approach, but were transparent about the fact that even though the function of these elements stay the same, the specific form is constantly growing, changing and evolving.

We were open about the role of our own reflections and action research as a vital part of what we do, and linked that back to our non-committal approach to explaining the “nuts and bolts”.

Before wrapping up the session, it was important for us to explicitly acknowledge the worries and concerns that came through the Google Form that we chose not to address in this first session. Again, we re-iterated that the session was just the “beginning of the conversation” and clearly explained our plan moving forward to ensure they knew that all of their needs would be addressed at later times.

We also focused their attention on what specifically they could do now, in the interim, to prepare themselves for the experience of being a parent in our model next year. We hilighted the importance of having them join the current conversation about changes needed in education.

In order to support them in this, we shared a resources document with them that included any source we referenced throughout the presentation, as well as other resources we felt might help them along in their journey to think critically about the education system.

Overall, it was a really successful evening! The energy in the room was great – parents were engaged in the conversation, sharing stories, reflections, thoughts and discoveries. Of course there were a few parents that hung back to speak to us one on one about further worries and concerns – and we were glad they did! Our goal was to start the conversation, so we were happy to have parents engage further with it right away!

Sadly, I won’t be there next year to continue the conversation with this group of parents… but I hope one of my colleagues picks up the mantle and documents the rest of this journey!

How do you bring your parent community “into the conversation”?

How do you support and challenge your parent community to develop a critical thinking approach about the current educational paradigm?

A few weeks ago, I shared with you my commitment to putting on my researcher’s hat in order to remain critical about the impact of the initiatives that myself and my team are implementing.

I also shared with you that I had no idea where to start….

… and then something amazing happened.

My team and I began planning for our How the World Works unit and we settled on the central idea: Thinking scientifically helps us understand ourselves and others.

And then it hit me! If this process we just planned is meant to help our students act on their curiosities in a reliable and valid way, then surely it could work for me too!!!

When promoting the model of action research to our students we explained:

And that is exactly what I am trying to do:

We know the problem. We have a solution that we think could help. We have put that model into action. Now we just need to track the effectiveness of our initiative.

Next, we will be guiding students to develop an overarching research question as well as sub-questions that support their big question… so I guess that is where I am headed as well!

A few weekends ago I was at a conference and something said by the key note speaker – Sir Kevan Collins – really stuck with me.

He was talking about our school and all the amazing, progressive, innovative things we are doing… which got us all proud and perked up!

And then he asked us:

How will you be sure that that what you are trying to accomplish, is actually being accomplished? How will you know if what you’re doing is “working”?

And then you could feel our collective consciousness pull back in contemplation.

This was especially impactful for me, as I had just joined the school and the Studio 5 initiative. This meant I was part of a specifically experimental team, trying to challenge the traditional model of school in pursuit of more student-directed, agentic learning.

How were we going to know if what we were trying to accomplish was actually being accomplished!? How could we be sure that our crazy experiment was working?

Obviously the answer was clear – and it was the point he was building towards in his address – with putting on the hat of risk-taker and innovator, also comes the need to put on the hat of researcher.

I’m not new to the practice of educational research. I completed a major research project during my MEd last year. But that felt different. That was research mandated by my university, required by my coursework and necessary in order to receive my degree. It was research I had to do… so I did it.

This is also research I feel I have to do, but for totally different reasons. I want to know the effect of our our innovation. I want to document and share the potential impact of our model with other educators. I want to know, for myself as a risk-taker, if I’m accomplishing what I am trying to accomplish.

When it came to our innovations, Sir Kevan Collins urged us not to be skeptical, but to be cynical. And although I agreed with the heart of his message, I did not agree with his word choice here. I think both words have a negative connotation — neither capture the eternal optimism and hope I feel about the risks I am taking with my team this year. I don’t feel I need to stop believing in what I am doing in order to be able to conduct valid, reliable research.

I have no idea where to start.